Character Depth- To torture or not to torture, that is the question 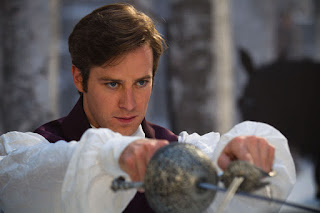 Lately I've been focusing on writing more emotion in my books.  Emotion is key.  So while wrestling with how best to incorporate emotion into my writing, I've decided that I 'm not so good at torturing my characters.  It's strange, one of my favorite things to read is tortured heroes or heroines overcoming odds.  Yet when I put my own pen to paper I hesitate in hurting my characters.  It probably has something to do with the fact that each of my characters is a little bit of my heart and soul and wounding them feels like a jab to my own chest.
I'm sure there is a much more philosophical discussion I could be having on why it's important we authors learn to hurt our characters in order to make them stronger, but I won't go into that.
Below is  scene where I've pitted two of my beloved rogues against each other.  When Lucien falls for his best friend's sister, all hell breaks loose.


My Question for you followers:      How do you capture emotion and create conflict?  Do you torture your characters and give them room to grow?
Posted by Lauren at 7:16 PM 9 comments: