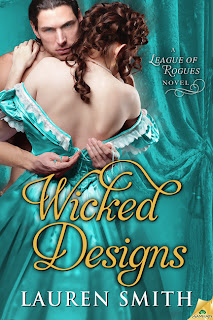 The League of Rogues takes what they want—but have they taken on too much?

Blurb: For too long Miss Emily Parr has been subject to the whims of her indebted uncle and the lecherous advances of his repulsive business partner. Her plan to be done with dominating men forever is simple—find herself a kind husband who will leave her to her books.

It seems an easy enough plan, until she is unexpectedly abducted by an incorrigible duke who hides a wounded spirit behind flashing green eyes.

Godric St. Laurent, Duke of Essex, spends countless nights at the club with his four best friends, and relishes the rakish reputation society has branded him with. He has no plans to marry anytime soon—if ever. But when he kidnaps an embezzler’s niece, the difficult debutante’s blend of sweetness and sharp tongue make him desperate for the one thing he swears he never wanted: love.

Yet as they surrender to passion, danger lurks in Godric’s shadowed past, waiting for him to drop his guard—and rob him of the woman he can’t live without.

Warning: This novel includes a lady who refuses to stay kidnapped, a devilish duke with a dark past, and an assortment of charming rogues who have no idea what they’ve gotten themselves into. 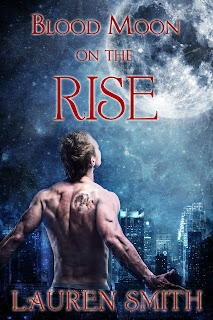 
Tamara wants nothing more than to protect the world from deadly paranormal creatures. Well, maybe she wants a little more than that. But the man she craves—Nicholas Rubin—is strictly off limits.
For years, Nicholas has been her loyal partner, helping to defeat murderous werewolves and take down unruly vampires.  Nicholas has always given Tamara his protection, friendship, and support. The only thing he hasn’t given her is his love. A relationship between Tamara and Nicholas is forbidden by ancient law, and the consequences could be deadly.

But when a powerful Sorceress threatens both their lives, Tamara has a choice to make: Give into her feelings for Nicholas, and risk her life. Or take a chance on Nicholas, and receive his love—at a price. 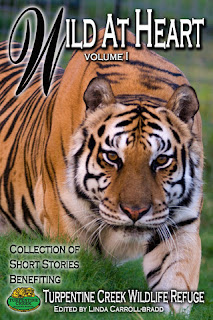 **All proceeds of the sale of this charity Anthology go directly to Turpentine Creek Wildlife Refuge to help care for the wild cats and other animals which the Refuge has rescued.

“Wild at Heart, Volume 1” is a wonderful collection of short stories written by eleven very talented authors to help raise funds for the Turpentine Creek Wildlife Refuge.  The anthology starts off with a very touching tale by the gifted Elle James/Myla Jackson who conveys a poignant story about a wounded soldier having trouble dealing with reintegration into civilian life and the way he is touched by one of the denizens of the refuge.  Most of the stories touch on the way the exotic cats arrive at the sanctuary although some have more fantastical advocates than others (yum, shifters), the difficulty of raising funds to provide an adequate enclosure for the substantial felids or canids or the dedicated people involved with this mission.  Rescues involving a few other species, including beached dolphins, a wolf, and other injured wildlife are all imaginatively and enthrallingly conveyed in entertaining stories.  Emphasis is placed on the foolishness of adopting an exotic animal without adequate preparation and education and the tragic results that often ensue.  An excellent fundraiser that provides fascinating stories, all of which would be excellent springboards for longer tales.
http://www.goodreads.com/book/show/17903008-blood-moon-on-the-rise