Today I'm interviewing the lovely and talented author Jenna Jaxon. Her newest book 7 Days of Seduction was recently released and Jenna stopped by to answer some questions.

Leave a comment below for a chance to win your own free copy of 7 Days of Seduction! 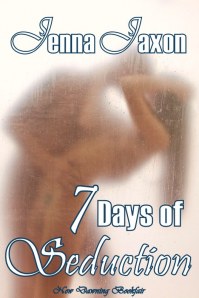 Lauren: Hi Jenna! Welcome to The League of Rogues Blog!

Jenna:  Hi, Lauren!  Thanks so much for having me here with your Rogues!  I’m sure my characters will fit right in. LOL

Lauren: So Jenna, you recently released a wickedly good book called 7 Days of Seduction. Tell me a little about the story.

Jenna:  7 Days is the story of Ashley, who parties a little too hardy one night and ends up having a ménage with her ex-boyfriend and a gorgeous stranger.  He is one hot dude, but she doesn’t know who he is until he turns up unexpectedly--in her shower.  Hunter’s been sort of stalking Ashley because he’s very attracted to her.  He manages to talk her into a week of colorful, seductive dates as he pushes her sexual envelope to the breaking point.

Lauren: What is your favorite thing about your hero Hunter? How does he interact with the heroine Ashley?

Jenna:  My favorite thing about Hunter is his outrageousness.  Outrageous, like turning up in Ashley’s shower when he’s a complete stranger.  And he is relentless with Ashley because he knows what he wants and how to get it and he lets nothing deter him from his goal.  I do like that determined quality in a man. J

Lauren: Jenna, you also write historical romances in addition to contemporary. How do you write sensual and plot tension between the hero and heroines in contemporaries and still make your books sizzle and sparkle (which they do! I know because 7 Days of Seduction nearly set my kindle on fire when I read it!)?

Jenna:  It’s actually easier for me to write love scenes in historical books because I’ve done so much it’s almost second nature to create the slow burn, to use the euphemistic language, to make the characters a bit more inhibited.  I’ve gotten the comment before on a contemporary to “stop writing like it’s one of your historicals.” LOL  I remember that what is forbidden is often the most tantalizing.  So in historicals there’s a lot that’s forbidden--so when you get to see or feel it, it heightens that experience.  With contemporaries I’m often afraid I reduce the encounters down to new positions or gimmicks.  I really had that feeling in 7 Days as Hunter’s trying to seduce Ashley with sex (really), and moving from one colorful position/situation to the next.  I hope I’ve woven enough characterization to make it interesting. J

Lauren: If your heroine has one piece of advice about love, what would it be?

Jenna:  Don’t be afraid to take a chance.  Ashley does that all the way through 7 Days, with fantastic results. LOL

Lauren: You’ve recently released 7 Days of Seduction, what’s next on your book schedule that readers can look forward to?

Jenna:  At present, my next historical, a novella sent in medieval England, called Betrothal, is with my editor and hopefully will be released by the end of November.  It’s the first in a series of three novellas, all together making a larger work, Time Enough to Love.  The other two novellas, Betrayal and Beleaguered, are slated to be released at one month (or 6 week) intervals afterwards.  And I’m also working on revisions of Only Marriage Will Do, the second in the House of Pleasure series, of which Only Scandal Will Do was the first.  I’m hoping to submit that to my editor at Lyrical by the end of November as well.

Blurb for 7 Days of Seduction:
Ashley Thompson had a wild time at her party last Friday night. Maybe too wild. She wakes to find a video of her in the middle of a ménage a trois with her ex-boyfriend and a gorgeous stranger. Unable to remember anything about the night, other than the hot sex she sees on the computer screen, Ashley begins a search for Mr. Hunk. She has no luck until he unexpectedly shows up–in her shower.
Hunter Hopewell intends to introduce Ash to a variety of sexual experiences he finds fun and exciting. He proposes a week long series of “colorful” encounters designed to seduce Ashley out of her kink comfort zone.
As their week of escalating pleasure intensifies, Ashley must choose to let go of her inhibitions or risk losing the best damn lover she’s ever had.
Excerpt for 7 Days of Seduction:

The bathroom door opened and closed. Her hands froze.
"Damn it, Sam. Why is it every time I take a shower you have to pee? Couldn't you just hold it for once? Or pee in a cup, for God's sake?"
"I'm not Sam. And I don't have to pee."
Ashley's eyes popped open and the bottle of body wash hit the tub with a loud thunk. The husky voice she'd heard on yesterday's video and in this morning's dream was richer in person. Sexier. Her heart took off like a deer after a shotgun blast. She peered at the shower door, seeing only a shadowy figure through the opaque glass. Well thank, God, for that. He couldn't see her either.
"Hello? Are you there, Ash?" The amusement in his tone brought her back to earth.
"Yeah, I'm here. And just who the hell are you?"
"I'm Hunter Hopewell. Sorry we didn't really get introduced the other night."
"No shit." Damn. The all-important name meant nothing. The spray from the shower roared in her ears and Ashley took a step toward the shower door.
"So who are you? I mean, you say Hunter Hopewell, but I don't know you. And you know me."
"Yes, I do. I've never met you, but I've been interested in you for a while now."
Despite the hot water, chills raced over her body, standing her hair on end. Oh, my God. A stalker. I've attracted a stalker. And I'm shut in a bathroom with him. Suddenly, she couldn't breathe.
"You work over in English at the university." He knew where she worked. "And I've seen you around the campus." He'd been watching her.
She wrapped her arms around her chest, shielding her body as best she could. Maybe Sam would come in.
"You're a beautiful girl, Ashley. With lots of potential."
Potential for what? Needing to breathe or pass out, she gasped in air.
"I think you should leave." Where the balls came from to utter that sentence, she had no idea.
"Why?" His voice rose an octave.
"Because you're scaring the crap out of me."

Hop over to amazon right now to get your own copy and be seduced!!

Readers, leave a comment and you’ll have a chance to win your very own copy of 7 Days of Seduction!
Posted by Lauren at 7:43 AM 6 comments: