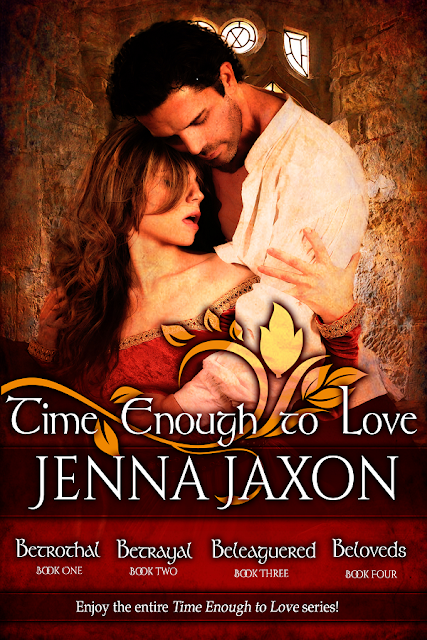 TIME ENOUGH TO LOVE
Blurb for Time Enough to Love

When Lady Alyse de Courcy is betrothed to Sir Geoffrey Longford, she has no choice but to make the best of a bad bargain. The hulking knight is far from her ideal man, and although he does possess some wit and charm, he is no match for the sinfully sensual man she secretly admires, Thomas, Earl of Braeton, her betrothed’s best friend.
From the first, Sir Geoffrey finds himself smitten by Lady Alyse, and, despite her infatuation with his friend, vows to win her love. When Geoffrey puts his mind to wooing Alyse, he is delighted to find her succumbing to his seduction. But when cruel circumstances separate them, Geoffrey must watch helplessly as Thomas steps in to protect Alyse—and falls in love with her himself.
As the three courtiers accompany Princess Joanna to her wedding in Spain, they run headlong into the Black Plague. With her world plunged into chaos, Alyse struggles with her feelings for both the men she loves. But which love will survive?

TIME ENOUGH TO LOVE EXCERPT 1
“Lady Alyse de Courcy!” King Edward called out again, bringing Alyse’s head up like a startled deer. “Present yourself before the court.”
Alyse shot off her seat. Oh, Lord! She had kept King Edward waiting.
“I beg pardon, sire.” She hurried from behind the table, too aware of all the eyes now on her. As she moved to stand before the king, the low drone of many voices rose around the room.
“Impudent girl.”
“I’d not want to be in her place.”
“Do you think the king will…”
Each snatch of conversation made her heart beat faster.
What will he do to me?
Her normal embarrassment at being the center of attention tripled at the thought of this blatant lapse of protocol. She stopped several feet from the dais and the room hushed as though everyone held their breath.
“What do you require of me, Majesty?” Her mouth so dry she could taste sand, Alyse fought to speak in a normal tone. With a sigh of relief, she dropped into a deep curtsy, hiding her face in the folds of her skirt. If only she could remain bowed thus before His Majesty for the remainder of the evening.
King Edward laughed. “Obedience, Lady Alyse, as I require of all my subjects. As your father requires of his daughter.”
Her heart thumped wildly in her breast. That could mean but one thing.
“Rise, my lady.”
She did so on unsteady feet. “I am ready, as always, Your Majesty, to obey my father as I would you.”
Holy Mary, let it be Lord Braeton.
King Edward lifted an eyebrow toward Alyse. “A very pretty answer, my lady. And are you ready to accept your father’s decree for your betrothal? His messenger has today reached me with the contract, as I am to stand in his stead in this matter.”
Alyse took a deep breath and hoped her voice did not tremble. “Yea, Majesty, I will obey my father.”
King Edward nodded and leaned over to whisper something to Queen Phillipa, who sat beside him, heavy with their twelfth child.
Mere seconds before she learned her fate. She could scarce affect an indifferent pose before the court when inside every inch of her quivered with anticipation of the name. His name, pray God, on the king’s lips.
Thomas.
In her mind, she heard the word.
The king straightened, glanced at her then at the man by her side.
“What say you then, Sir Geoffrey? Does the lady not speak fair? I vow she will make you a proper wife and a dutiful one as well.”
Alyse turned, until that moment unaware that Geoffrey Longford stood beside her. Chills coursed down her body as the king’s words echoed in her mind. The sensation of falling backward assailed her, as though she rushed away from the tall man at her side even as his figure loomed larger and larger in her sight.
Not Lord Braeton.
Her numbed brain repeated the phrase, trying to comprehend that instead he would be her husband. Geoffrey Longford.
God have mercy on me, for by the look of him, this man will not.

Jenna Jaxon is a multi-published author of historical and contemporary romance.  She has been reading and writing historical romance since she was a teenager.  A romantic herself, she has always loved a dark side to the genre, a twist, suspense, a surprise.  She tries to incorporate all of these elements into her own stories. She lives in Virginia with her family and a small menagerie of pets.  When not reading or writing, she indulges her passion for the theatre, working with local theatres as a director.  She often feels she is directing her characters on their own private stage.
Jenna is a PAN member of Romance Writers of America as well as President of Chesapeake Romance Writers, her local chapter of RWA.
She has equated her writing to an addiction to chocolate because once she starts she just can’t stop.